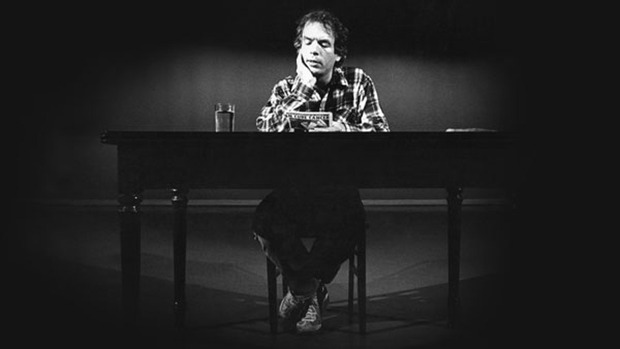 For fans of Spalding Gray familiar with his monologues from films like “Swimming to Cambodia” (1987), directed by Jonathan Demme, or “Gray’s Anatomy” (1996), directed by Steven Soderbergh, “And Everything Is Going Fine” (also directed by Soderbergh in 2010) is somewhat of a departure from form. In an effort to create a more complete picture of who Gray was, Soderbergh pieced the documentary together entirely from Gray’s performances, interviews and candid moments. Because the very nature of the documentary demands it to be a series of segments that Soderbergh has strung together, don’t expect to ride through from start to finish on the steam of Gray’s signature rapturous, breathless delivery. Still, what Soderbergh’s documentary lacks in momentum it makes up for with its sensitive portrayal of a man possessed by the art of storytelling.

Gray described what he did onstage as “Using myself to play myself.” Equipped with only a spiral bound notebook to which he rarely referred and a glass of water from which he seldom drank, Gray enacted rich scenes and played multiple characters in rapid fire dialogue with one another and with himself. Soderbergh begins his documentary the way Gray began all his monologues, with footage of a man alone onstage in the quiet moments before he launches into an explosive performance. Criterion’s recent release of the film includes writer Nell Casey’s essay, which perfectly describes that scene.

“At first, we see only a wooden table and a chair on a stage. The scratchy video recording skips and jumps a bit, giving the viewer a hint of the history; this is raw footage shot in 1982. The happy murmur of the unseen audience suggests a large crowd is awaiting the performance. A man walks onstage—dressed plainly in a plaid shirt and jeans—and applause rises up. He puts a glass of water down on the table. He offers a quick, offhand thanks, as if he were slightly embarrassed to find himself there. He pulls a spiral notebook out from a drawer in the table. He places it in front of him, takes a sip of water, and looks skyward while summoning his thoughts. He looks out on his audience—now with an open, direct expression—and he begins to tell a story.”

In an event that a shocked many, Gray jumped off the Staten Island Ferry in 2004. Through Soderbergh’s loving autobiography we get a little closer to man who continually bore his soul onstage but nevertheless remained a mystery. Criterion’s release includes The Making of “And Everything is Going Fine,” as well as Casey’s essay and Gray’s very first hour-long monologue, “Sex and Death to the Age 14“. The new edition is available for $32 from Criterion Collection.

This article was originally published on Cool Hunting.